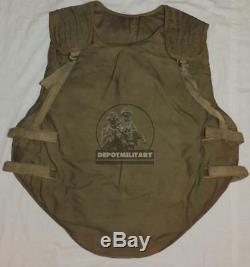 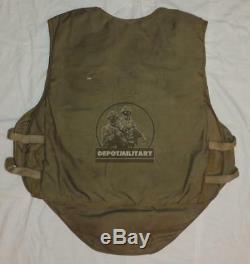 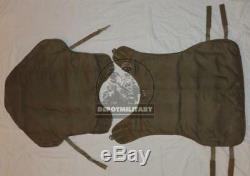 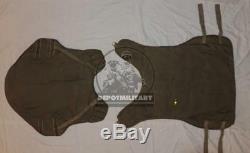 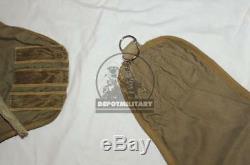 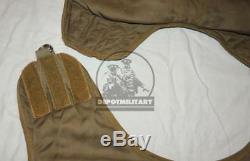 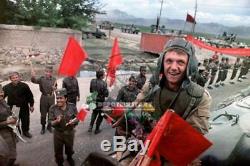 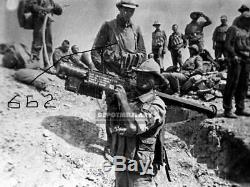 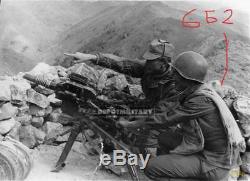 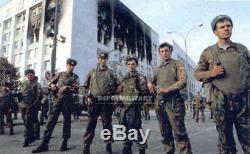 One place on the back of the case, where there was a gap, was sewn, is indicated by a yellow arrow. But for such an ancient artifact this is an excellent condition! Used by army and GRU spetsnaz (Main Intelligence Directorate of army). 6B2 is first generation army armor vest.

It is first massive army bulletproof vest in the Soviet army. Developed in the USSR "Research Institute of Steel" in late 1978. Was adopted to supply the Soviet Army in 1979. Widely used in the war in Afghanistan. 6B2 consists of chest and back parts connected with each other in the shoulder joints and with the side buckles. Protective composition consists of titanium armor plates ADU-605-80 1.25 mm thick and ballistic screen of 30 layers of aramid fabric TSVM-G. Provides Ballistic protection and protection from pistol bullets. Weight 4.8 kg of body armor. Design feature is the use of a protective structure m. Circuit board, which set hard armor elements. By the same principle were arranged all subsequent Soviet combined arms vests first generation (6B3, 6B4 and 6B5). UNIQUE OFFER bulletproof vests 6B2, veteran of the war in Afghanistan and the first Chechen! Very rare offer, now there are not only vests even in collections! We have only one such vest and never will be more! Lot consist of full set of protection elements. The item "6B2 SOVIET RUSSIAN ARMOR VEST 1983 WITH PLATES (AFGHANISTAN & CHECHEN CAMPAINS)" is in sale since Wednesday, April 18, 2018. This item is in the category "Collectibles\Militaria\1976-89\Original Period Items".

The seller is "fortunebaloven" and is located in Moscow. This item can be shipped worldwide.