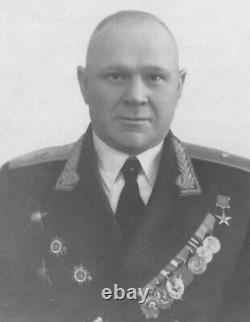 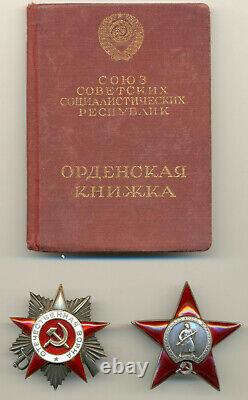 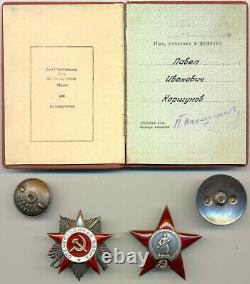 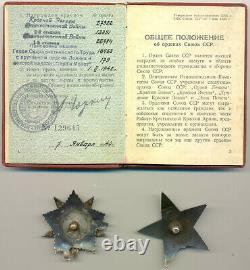 All items in Good Condition. Born in the village of Milyukovka now in the Narovchatsky district. He studied at the general economic faculty of the pedagogical academy in the city of Samarkand. From the third year, in 1929, he. Was drafted into the Red Army.

He served in the Mountain Rifle Regiment of the Central Asian Military District. Was discharged to the reserve. He worked as the head of the watch department of the Palace of Pioneers of the Zamoskvoretsky district of Moscow.

In April 1932, he was. Again drafted into the ranks of the Red Army. And appointed to the post of company commander of the 21st construction railway regiment of the special corps of the railway troops. In subsequent years, he commanded a regimental school, was the chief of staff of the training battalion, was elected secretary of the party bureau of the training battalion. Korshunov met the beginning of World War II.

Korshunov's battalion was deployed on one of the main directions of the South-Western Front. Military railway workers formed convoys to send the rear, extinguished fires, eliminated the consequences of German air raids, and evacuated valuable property. Soldiers of the battalion were in full swing undergoing restoration work at a number of railway sections, as well as at Voronezh. Especially Korshunov and the unit headed by him excelled in restoring the Kursk railway junction.

Three days after the enemy's retreat, he was rebuilt and could receive and send 25 pairs of trains per day. Kursk station was repeatedly bombed by the Luftwaffe. The soldiers of the railway troops were able to quickly eliminate the consequences of the raids and ensure the passage of military trains to the front.

More than 800 fascist aircraft raided the Kursk. The bombing lasted 22 hours. During this time, about 1,600 bombs were dropped on the site. It was destroyed 12 kilometers of station tracks, a depot, a water building, many turnouts, 154 loaded wagons, 8 steam locomotives.

Kursk station was loaded with trains. In many of them were ammunition. Separate cars burned, shells and mines exploded in them. Black from soot, fighters of the 77th battalion threw themselves into the fire, under the explosions of bombs and shells, together with the station's railroad workers trying to withdraw the surviving cars. Over the years of the war, I saw a lot of destruction, but such as in Kursk in the summer of 1943, I had never seen before. Everything lay in ruins, and it seemed that it was impossible to restore the movement of trains under bombardment, in conditions of mines and shells bursting in cars, in a few weeks. The battalion Korshunov took 11 hours and 30 minutes to restore the movement of trains. After 35 hours, the consequences of the bombing were completely eliminated. Work was begun under fire.

Many unit fighters were awarded state awards. By a decree of the Presidium of the Supreme Soviet of the USSR.

Colonel Korshunov Pavel Ivanovich was awarded the title Hero of Socialist Labor. For special merits in providing transportation for the front and the national economy and outstanding achievements in restoring the railway industry in difficult wartime conditions.

The head of the Kursk station, Pyotr Alekseevich Shubin. And the brigade commander, Colonel Pyotr Ivanovich Bakarev. Also became the heroes of Socialist Labor. Pavel Ivanovich finished the victory as chief of staff of the 47th railway brigade and with the rank of colonel.

He continued his service in the railway troops in command posts. He was awarded the title of Major General. He lived in the city of Kharkov, actively participated in the education of youth, and headed the council of veterans of the railway part.

He died on March 31. He was buried in Kharkov.