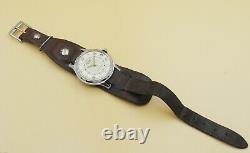 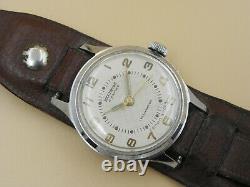 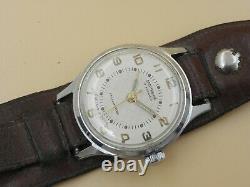 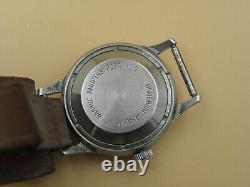 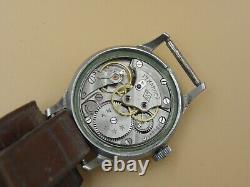 The watch is produced at the. First Moscow watch factory(1MChZ) KIROVA. 1956 - the manufacturing of the first Soviet watch with central second hand stats. The models was named'MOSKVA' (it means MOSCOW),'SPORTIVNIE' (it means SPORTING),'KIROVSKIE','RODINA' (it means MOTHERLAND). It was the FIRST mechanical wristwatch with central second hand and stop second function produced in the Soviet Union. Watch have 17 rubies, shock-proof balance and balance have Breguet hairspring. On the dial inscriptions in russian :' SPORTIVNIE','17 jewels','1 MCHZ Kirova','Made in USSR'. The mechanism is decorated in Swiss style. The mechanism has a polished parts and decorated in the style Côtes de Genève. It is very rare watch with Logo 1MCHZ on the movement. Watch is in working condition, serviced. The watch keep correct time.

On December 20th 1927 the Soviet government made a decision to establish a watch industry. In April 1930 construction of the main block of our factory began in the place of the old tobacco factory, and seven months later the factory came into operation in line with the active enterprises in the country. The first 50 pocket watches were made from the details of their own manufacturing for November 7th 1930 - from this moment the count of time began for the First Moscow Watch Factory. 1935 - the year in which the factory was given the name Sergei Mironovich Kirov - was crucial in the history of the factory. The reconstruction of the enterprise began. The production of pocket watches rose to 450 thousand. In addition, the manufacturing of special clocks for cars and airplanes was mastered. In 1955 the annual production of watches at the factory reached 1 million 100 thousand. The introduction of new equipment and new technological processes allowed the release of new types of watch with complex mechanisms: with a central second hand.

Watch models such as'Moskva','Mayak','Sportivnie','Rodina','Kirovskie' appeared. On April 12 1961 Yuriy Alekseevich Gararin took with him into the first space flight in the history of man a watch'Shturmanskie'. The watch successfully sustained the space trial. The staff of the enterprise maintained close contacts with the cosmonauts: during the time in space our cosmonauts observed the factories devices of time.

The name'Poljot' the industrial firm received in commemoration of space travels. In 1977 marine chronometers and deck clocks from the First Moscow Factory cruised to the North Pole on an atomic-powered vessel'Arktika' and sustained the ordeal with honor. According to the results of the work in 1991, 1992 and 1993, the factory was awarded International rewards'For quality'. The First Moscow Watch Factory is the pioneer of watch manufacturing in the.

Almost all types of man's mechanical watches in the. That were famous, were developed and produced in our factory. THIS WATCH IS AS SHOWN IN THE PICTURE. PICTURES ARE UPLOADED FOR YOUR CONVENIENCE.

PLEASE, NEVER LEAVE A NEGATIVE OR NEUTRAL FEED BACK, IF GOT ANY PROBLEM REGARDING TO THE ITEM KINDLY CONTACT ME. This item is in the category "Jewelry & Watches\Watches, Parts & Accessories\Watches\Wristwatches". The seller is "fialkin77" and is located in this country: UA. This item can be shipped worldwide.