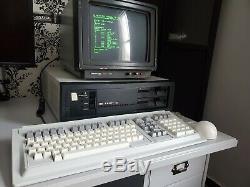 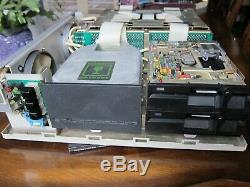 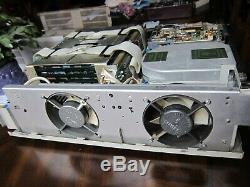 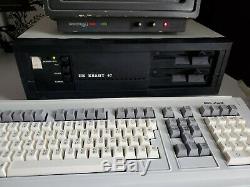 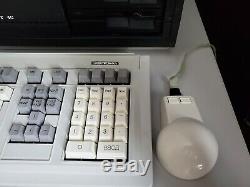 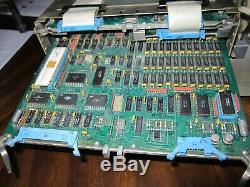 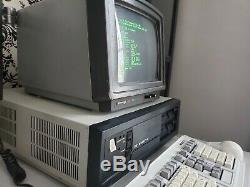 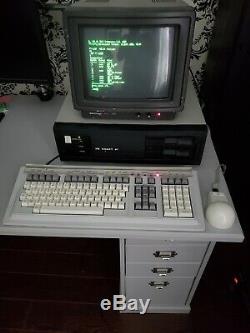 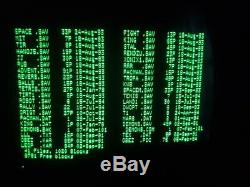 A rare vintage piece of Soviet computer history. It had several official names: -4, 4, 1201.04. All which meant the same - the last generation of the most powerful desktop PDP-11-compatible machines ever created for the enterprise users and research centers of the Soviet Union in the late 80s.

Unfortunately, the high price of the machine (17000 RUB which is more expensive than a brand-new Russian Lincoln at that time), relatively low number of units manufactured, rich of the precision metals, and the entire shutdown of the Soviet era made this Soviet PC to be one of the rarest and highly desirable machines among computer collectors in Russia today. For some specs - it has 1Mb of RAM, 20Mb HDD (never had any bad blocks on it), and a rare color monitor.

The CPU is 16-bit, 6 MHz. 2 x 5 FDDs (not compatible with PC). Runs on RT-11SJ operation system and every part of the computer is made in the Soviet Union, all original and was never repaired.

All works properly as it should and comes with the keyboard and mouse. Usually, it included 256Kb of RAM and a monochrome display (only every 10th machine was bundled with a color display at that time). This one has factory installed 1 Mb of RAM which is a big WOW. I doubt you will find any other in such configuration.

I was told that this machine was decommissioned from the second space surveillance center in Moscow in 1993. The machine is noisy, bulky and heavy (78 lbs or 35 kg). The item "Vintage Soviet Russian Personal Computer DVK-4 (PDP-11)" is in sale since Wednesday, December 18, 2019. This item is in the category "Computers/Tablets & Networking\Vintage Computing\Vintage Computers & Mainframes". The seller is "trustvv" and is located in Toronto, Ontario.

This item can be shipped to Canada, United States.