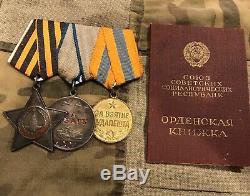 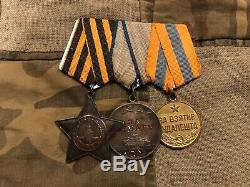 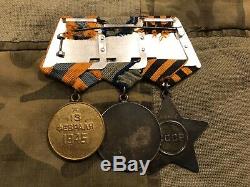 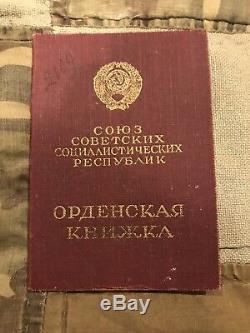 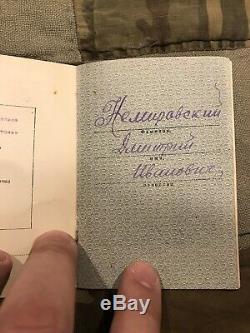 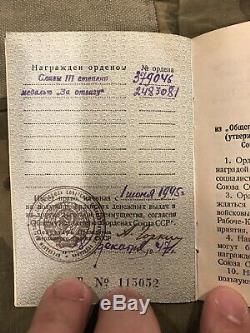 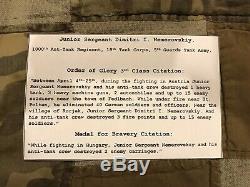 For sale is a researched mounted group of 3 consisting of the Order of Glory 3rd class, Medal for Courage, and Capture of Budapest Medal. The medals are in great shape. They come with the order booklet and archival research. Junior Sergeant Dimitri Ivanovich Nemerovskiy. 1000th Ant-Tank Artillery Regiment, 18th Tank Corps, 5th Guards Tank Army. Dimitri Nemerovskiy was born in Kharkov Ukraine, in the year 1911. Following the Battle of Kursk in July of 1943, Dimitri was drafted into the red army.

The 38 year old Sergeant was a combatant in every following engagement that liberated Ukraine. He was lightly wounded twice during the Dnieper-Carpathian Offensive. While fighting in Karcag, Hungary, Junior Sergeant Dimitri Nemerovskiy and his gun crew destroyed 2 enemy carriages. It was for this action that he was awarded the Medal for Bravery in October 1944. Between April 4th-25th 1945, during the fighting in Austria Junior Sergeant Nemerovskiy as part of an anti-tank crew destroyed 1 heavy tank, 3 heavy machine guns, 2 automobiles, and 15 enemy soldiers near the town of Fedlbach.

While under fire near St. Polten, he eliminated 40 German soldiers and officers. Near the town of Rorjak, Comrade Nemerovskiy and his anti-tank crew destroyed 3 fire points and up to 15 enemy soldiers. He deserves to be awarded the Order of Glory 3rd Class.