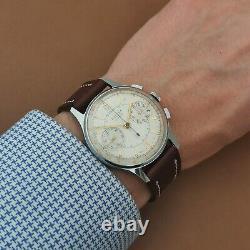 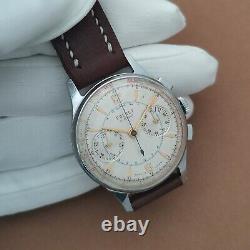 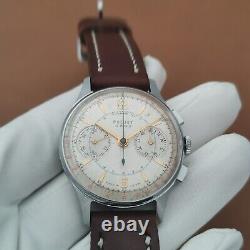 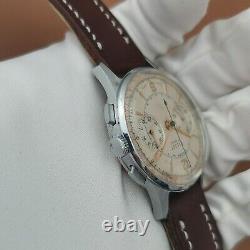 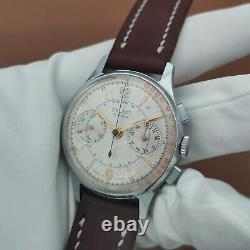 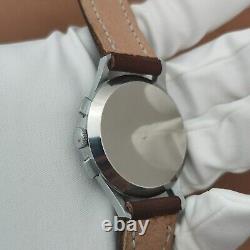 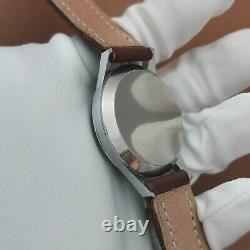 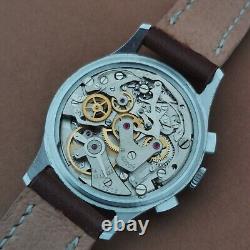 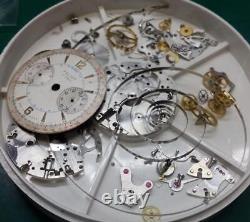 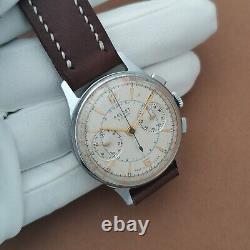 Vintage watch POLJOT 3017 USSR Chronograph. The watch is serviced by a watchmaker, all functions work. You can use the watch right away. I can make a video of all the functions of the watch.

Included with the watch is a handmade leather strap. Case diameter with crown: 39 mm. Height of the watch: 10 mm. History from the Internet: The early history of watches ("POLJOT"), "Arrow" dates back to the Russian models of the chronograph, which was once assembled by the First Moscow Watch factory. It was a model 3017 equipped with a unique column chronograph wheel based on the Swiss model Venus 150/152.

The production equipment that was once used to manufacture this very model of Venus 150/152, together with the corresponding drawings and all technological details, was imported from Switzerland to the Soviet Union in the mid-fifties. So, the mechanism of the model 3017 was made on this equipment, and therefore is rightfully considered one of the first products of the First Moscow Watch Factory. In 1964, the factory was renamed "Flight".

In addition, the Model 3017 became one of the first chronograph models ever created in the Soviet Union. The early models were among the first Soviet watches that were based on the new Russian Model 3017 mechanism. On the dial of this watch there were two registers and a constant second hand, as well as a central chronograph hand to measure the time (in seconds) that has passed since the start of the cutoff. The watch was produced in a chrome case, steel back cover.

The first model was first released in 1959, and at first was available exclusively to Air Force officers, as well as some high-ranking officials. In the early years of its history, Strela chronographs were used in the Soviet army, and this was due to the ever-growing need for exceptional accuracy in measuring time, both on earth and in the sky.

These watches were officially awarded to pilots and cosmonauts for carrying out successful flights for a long time. The design of the chronograph has undergone some changes during its history. In particular, the "Arrow" has become available in a number of different models and designs, various functions and dials. These variations of the Arrow models have also been released under various names during the long history of this chronograph. However, one way or another, today, all copies of these mechanical watches that have ever been released are simply called "Arrow" models.

Firstly, in the late sixties, chronographs of this brand were produced exclusively with Cyrillic inscription on the dial. A little later, in the early seventies, this model appeared before us under the name "Flight", and with a Latin inscription on the dial. It was then that Strela chronographs became available to a wider range of users, in particular, party members, employees of the Soviet railway, scientists, etc. In the late seventies, the inscription on the dial changed to "Sekonda". So as of the end of 1979, the total number of chronographs "Strela", issued under the name "POLJOT", "Flight", "Strela" and "Sekonda" reached the mark of 100,000 units. In 1979, three years after the introduction of the new model of the chronograph model "Flight" 3133, the model of the brand "Flight" 3017 was discontinued. This was the end of the history of watches that had been in space several times. In addition, this can be considered the end of the Soviet history of the model 3017 watch with a column chronograph wheel. There were exhibited some significant elements that played a role in the history of Soviet and Russian cosmonautics. Among the industrial exhibits and objects that once belonged to cosmonauts and engineers of the Russian Space Program, some helmets, clothing and other memorabilia were presented.

The Strela chronographs have become the pearls of this era. This item is in the category "Jewelry & Watches\Watches, Parts & Accessories\Watches\Wristwatches".

The seller is "vintage_watches_by" and is located in this country: LT. This item can be shipped worldwide.