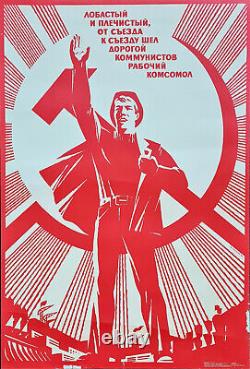 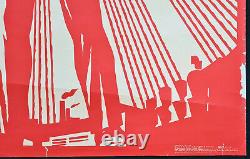 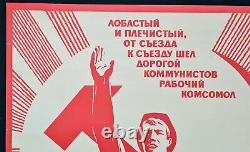 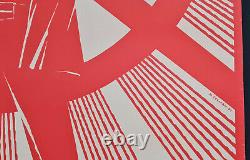 Original slogans on the poster. Literally English translation of the top slogan. WITH STRONG FOREHEAD AND WIDER SHOULDER, FROM THE CONGRESS TO THE CONGRESS WALKED THE PATH OF COMMUNISTS THE WORKING KOMSOMOL.

X 39 = CM: 67 x 99. The poster was folded one time just in the middle, and one that can be seen at the picture, there was made pre-restoration - flattened under professional press and some tape repairs, otherwise the poster looks really impressive and incredible alive, especially famed hanging on the wall. This poster was created by: Getman Mikhail Anatolevich (1947-alive) - Soviet Ukrainian graphic artist, poster artist. Member of the Union of Artists of the USSR. Was born in 1947 in Zhitomir.

He studied at the Moscow State Art Institute named after V. Surikov, in the poster workshop of N. After graduation in 1976, he worked mainly in the field of political posters. Since 1974 he has been working at the "Plakat" publishing house.

From the same year he took part in republican, all-Union and international exhibitions of posters, exhibitions of Soviet posters abroad. In the late 1980s, Getman emigrated to the United States. VLKSM The All-Union Leninist Young Communist League Russian:?????? , usually known as Komsomol Russian:??????? A syllabic abbreviation of the Russian kommunisticheskiy soyuz molodyozhi, was a political youth organization in the Soviet Union.

It is sometimes described as the youth division of the Communist Party of the Soviet Union (CPSU), although it was officially independent and referred to as "the helper and the reserve of the CPSU". The Komsomol in its earliest form was established in urban centers in 1918. During the early years, it was a Russian organization, known as the Russian Young Communist League, or RKSM. During 1922, with the unification of the USSR, it was reformed into an all-union agency, the youth division of the All-Union Communist Party. This item is in the category "Art\Art Posters".

posters" and is located in this country: US. This item can be shipped worldwide.