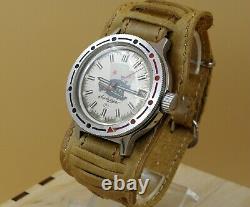 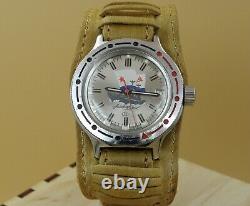 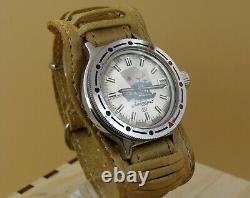 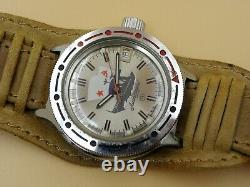 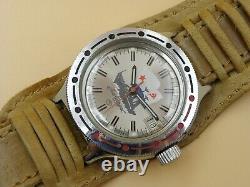 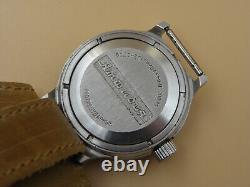 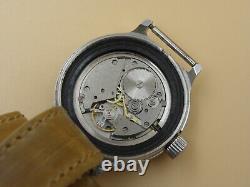 I bring to your attention this soviet military watch VOSTOK Amphibian. Estimated manufacture date is 1990s. It was manufactured by Vostok Factory in Chistopol. The factory was the official supplier for the Department of Defense of the USSR and produced watches exclusively for the Soviet Army.

The dial signed: Albatros Movement is in a fully working condition. This is a VOSTOK MILITARY Watch Amphibian Legendary watch of commanders Technical information: Are closed for access of water, maintain pressure and successfully work on depth up to 200 meters. Watch is dust-proof, shockproof balance. Luminescent hands and hour markers.

On July, 1950 the factory has started construction of own industrial buildings. 1952, The factory began release of "Kama" shock-proof watches in water-proof case, clock devices for various branches of a national economy.

1957, Release of precision watches: K-28 "East", "Mir", "Volna", "Saturn", "Cosmos" with lateral and central second hands, a lens and shock-proof movement is mastered. Export of Chisopol watches has increased in 7 times. 1962, Precision watch "Vostok" are awarded with the big gold medal of the Leipzig international fair.

"Komandirskie" watches are developed and started in manufacture and Chistopol watch factory became the official supplier of these watches to the Ministry of Defence of the USSR. 1968, Release of "Amphibian" watches is mastered. Since 1969 all watch of a factory are manufactired under "Vostok" trade mark, and the factory began to refer "Chistopol watch factory "Vostok. 1972, Release of a new 24 calibres man's watch with a numerical calendar, a double calendar, with automatic movement are begun.

Watches are exported to 54 countries of the world. Grechko during visit on a factory thanks watch-makers for release of qualitative products and gives to chistopol watch makers the "Vostok" watch which has visited the space. 1980, This year the factory issues the plenty of a watch - 4,5 million pieces. All production only the first and supreme categories of quality. 1986, Release of water-meters, tahografov accustoms, release of manometers are begun. The factory passes in the Ministry of the radioindustry. Chistopol faculty "Vostok" of Kazan Aircraft University is opened. 1989, The factory passes to self-financing, in 1990 - on rent. The assortment of watches is annually updated on 70%, release of watches with custom-made symbolics is mastered. 1992, The factory passes under jurisdiction of Republic Tatarstan and becomes Open Joint Stock company. Small enterprises on manufacture of completing for watches are created. The big parties of watches are exported to Italy, USA, Switzerland. In USA the greatest popularity was received with "Desert storm" watch. 2000, Vostok Watch Makers Inc. Is the leader of the domestic watch and clock industry on volumes of release and sales of a man's watch. Release of the female watches, expensive, prestigious man's watch, a quartz alarm clock are begun. 2001, The factory became the owner of "The Russian National Olympus" the prestigious premium in a nomination To Technology. A science" and the winner of "The Russian organization of high social efficiency competition in a branch nomination. 2003, The company Koliz Vostok Co. Ltd" was founded as a joint venture between the Russian movement- and watch-maker "Vostok Watch Maker Inc. " and the Lithuanian enterprise "Koliz Ltd.

To offer the world market a new generation of automatic watches based on the traditional Russian watch-making technology and new design from Lithuania. The first collection of the new watch brand Vostok Europe was introduced at Basel. 2004, Under the slogan "The best of Soviet technologies for modern watch design" and has been a big success on the world market since that time. Further cooperation between the Vostok Europe movement supplier (Vostok factory) and Vostok Europe producer (Koliz Vostok) has a lot of potential. THIS WATCH IS AS SHOWN IN THE PICTURE.

PICTURES ARE UPLOADED FOR YOUR CONVENIENCE. PLEASE, NEVER LEAVE A NEGATIVE OR NEUTRAL FEED BACK, IF GOT ANY PROBLEM REGARDING TO THE ITEM KINDLY CONTACT ME.

This item is in the category "Jewelry & Watches\Watches, Parts & Accessories\Watches\Wristwatches". The seller is "fialkin77" and is located in this country: UA. This item can be shipped worldwide.